Friday Fictioneers, you know the drill: one photo, one hundred words. If you haven’t been following, hop on over to Rochelle‘s page and see where all we’ve been. This week’s photo is courtesy of Kent Bonham. 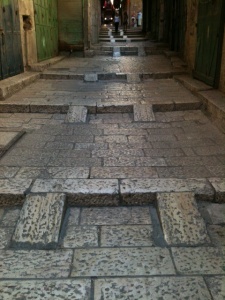 “What the hell is this? Game of Bones?”

“Then what, the Ripper? I heard FX had rights.”

“Some assistant—you bring me to set for a cameo and this stinking alley is what you give me to work with?”

“You’re a legend, sir. We didn’t think you needed prep.”

“Damned straight. Hey—what’s with the knife? Is this a Scorcese project? That old bastard.”

The blade slid in and out of the aging actor’s insides as smoothly as a prop.

What can I say, Friday Fictioneers always racks up the body count.

“So, what comes next?” is the question that follows swiftly on the heels of someone finding out I’m graduating in December, a semester early. It is slightly more dreaded than that other favorite question of acquaintances, long-lost friends, and older relatives: “How is the love life?”

Since a dead pan response such as this one suggested by my sister –“Just tell people that you’re going to become a killer for hire and the first people you’re going to go after are all the people who ask you what you’re going to do when you graduate…”– is unfortunately off the table, I’m usually left trying to formulate some other response that doesn’t convey utter panic. “I’m working on getting an internship,” or “I’m still figuring things out,” or anything that is polite and hopefully stops the conversation in its tracks.

Because the truth of the matter is, I don’t know. Yet. I’ve heard two very different viewpoints on my so-called “lack of direction” (thanks, tactful friend). One is that my uncertainty is completely normal–college graduates everywhere are trying to figure out what to do with their degree and students still in college will change their degrees several times over the course of their college career. Unfortunately for me–and very fortunately for many of my friends–they have a clear view of what they want to do and where they are going. The other view is that you should know exactly what you are doing with your life as soon as you graduate. Maybe people have epiphanies as their tasseled caps rain down on them and they clutch their diplomas. But I doubt it.

I think uncertainty is more widespread than a cocksure knowledge of what you want to do. In fact, I do know what I want to do. I want to write, I want to explore, I want to travel, and I want to have adventures–in whatever capacity any or all of those things are possible. Unfortunately, that’s not such a cut and dried answer, like people expect. However, I think people fail to realize that nothing is “certain.” I know English majors who go to law school or are working in business or even for oil companies. I know business majors who work outside the field of their major or decided they want to get a masters in something completely different. I think I simply bought into the “10 year plan” that is ingrained into many of us from middle school: go to high school and get good grades, then do the same in college, then graduate and BAM! a job will fall into your lap. Maybe some of that was true before the economy and the job market fell into the state in which they are now, maybe it was just a sneaky plan to get all of us to do our homework. But the truth is, having a “plan” sometimes becomes completely moot.

I was watching The Dark Knight yesterday and the character the Joker, played by the late Heath Ledger, says “Notice how nobody panics when everything goes ‘according to plan?'” It’s such a small statement, uttered by a psychopathic anarchist character, but it has a definite ring of truth. It’s the same idea as the aphorism “Even the best laid plans go awry.” You can plan for certain things in life, you can set realistic-achievable goals, but a 10 year plan, or a 5 year plan, or even a 3 year plan can fall apart and crumble down around you. Jobs can be lost, industries can go bankrupt, and any other sort of catastrophe can and possibly will occur.

So who is right in the end? The person with the “Plan” that may or may not make it through Phase one, or the person with an “Idea” that can evolve and hopefully adapt to the curve balls life so often throws?