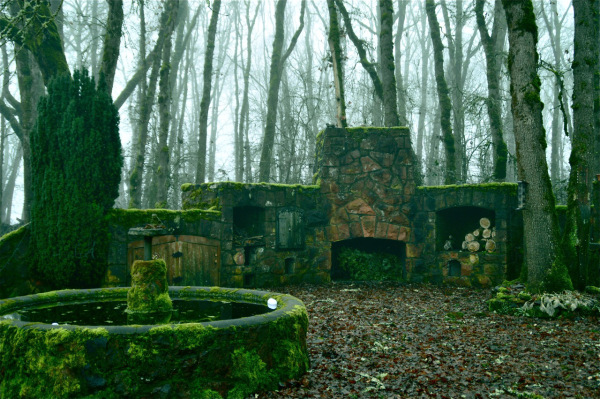 Friday Fictioneers: One photo, one story of 100 words. 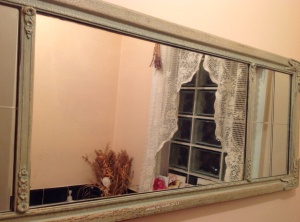 There are things you know you’ll miss—for me it was cheeseburgers, that particular satisfaction of drinking a cold beer after a long day out on the lake. Then there are the people; the ones who grow old and fade away, leaving you alone like the last skeletal leaf clinging to a tree when the snow starts falling. That part was harder, watching parents and friends wither into nothing, into food for worms. They didn’t tell me I would miss my reflection, that I would slowly forget my own face. Sometimes, I’m not certain I exist. Then, I get thirsty.

Friday Fictioneers–look at the photo, write a story circa 100 words, and click the blue frog to link your story or read other tall tales. 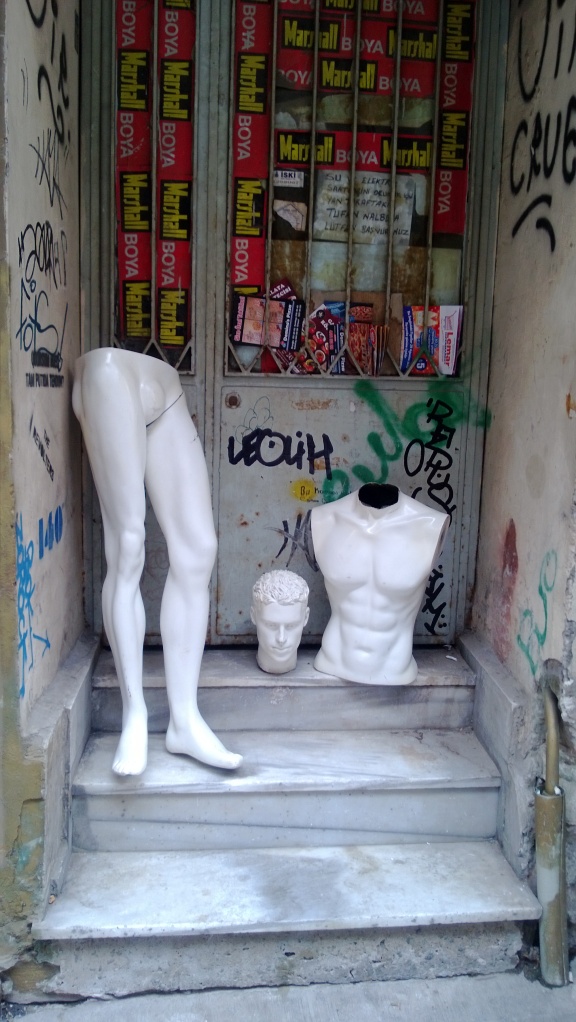 The king’s men I can understand—they’ve got hands, they can use tools; they know their way around a hot glue gun. It’s the horses that really get me. They don’t even have opposable thumbs. And they make me sneeze.

Do you know how hard it is to sneeze when your head isn’t connected to the rest of your body? It’s no picnic, let me tell you. So here I am. Humphrey Dumphie—what a name, right?—in pieces because the king just had to go and volunteer me for his favorite magician’s new magic trick. 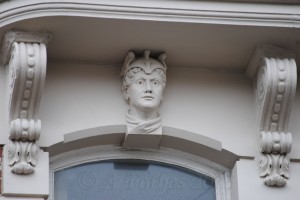 “Are you sure this is the right doorway?”

“They said to look for a creepy stone face with a winged helmet.”

“But it’s not even a doorway. This is just a blank wall.”

“This is the Gateway! Have I taught you nothing?”

“I expected it to be bigger.”

Alastor closed his eyes and took a deep breath. “Serax, I brought you on this mission for a reason.”

“Yes, Master,” the little demon hung his head. “Do you get the feeling that face is watching—”

Michael, the archangel, blinked his flaming eyes once and retreated back into the stone. 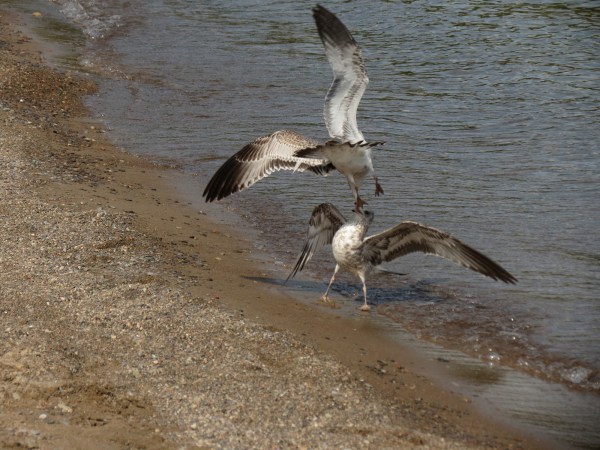 The cries echoed along the cold, windswept beach as two gulls fought some private battle of their own. The chill was tangible, settling on her bare arms, nestling in the tumbled tendrils of her hair.
Shoes, dress, bra–they lay huddled on the ash-colored sand behind her, edges flapping limply in the wind. The first prickles of water on her bare toes were like electric shocks, shooting up her legs, leaving a trail of chill-bumps behind. The water enveloped her calves, thighs, hips, chest, chin, filled her ears.
She reappeared at the surface with a gasp, sending the gulls into flight.

*The title comes from the quote by Isak Dinesen: “The cure for anything is salt water – tears, sweat, or the sea.”

Friday Fictioneers is here again with a photo from Managua Gunn. 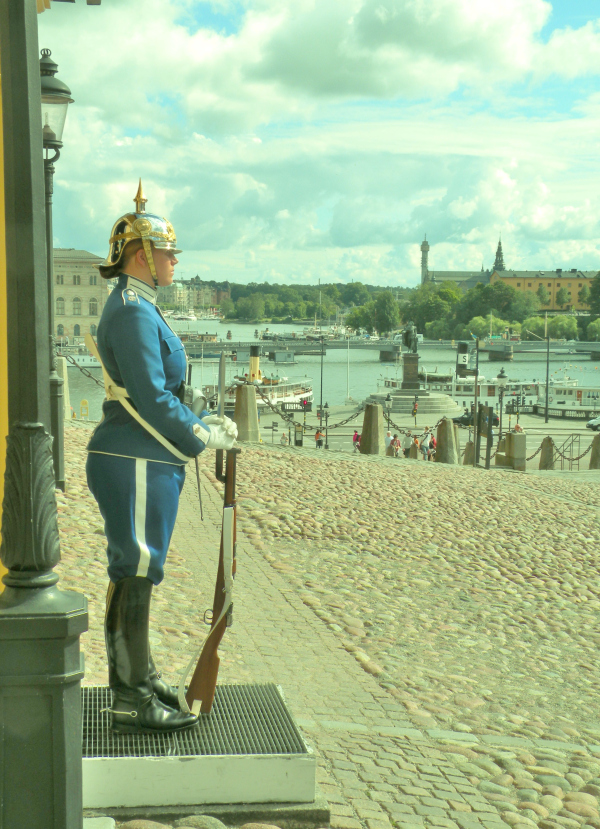 He stood at the palace gates. Not too close; he wasn’t fooled by the guard’s imitation of a statue. One wrong move and she’d use that gun to beat him into submission or put a bullet in his brain.
He shifted, uncomfortable in his unfamiliar clothes. The bright yellow smokestack of the steamer ship bobbed steadily as the ship drifted towards the open ocean. He licked his lips once, squinting at the sparkling water. Any minute, now.
The boom as the steamer exploded and captured the guard’s attention gave him all the time he needed to slip through the gates. 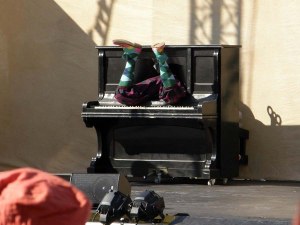 Marvel stared at the item from the back of the crowd. The rest of the bidders chattered excitedly.
“What a find!”
“Didn’t know there were any still around. Did you?”
“Thought they were banned…”
The legs twitched once. Marvel grinned. It was in pristine condition. This much excitement among people who knew what it was–or thought they did. He pushed his way through the crowd. It parted before him, whispering.
“Is that…?”
“Can’t be…”
“I heard he was dead.”
“Four hundred thousand Krona,” Marvel said.
“Sold!”
This particular soul was the perfect addition, a bargain. His collection at last complete. 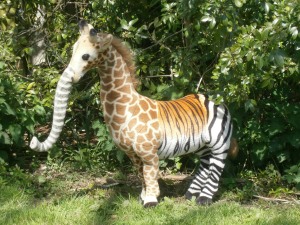 Only someone so delightfully deviant could have picked such a hiding place. She stood with her arms crossed, head tilted as she examined the strange stuffed animal. It was a melange of  a zebra, elephant, giraffe, and god knows what else. The laughter of the children wafted through the trees.
She knelt down on the grass where it gazed innocently up at her with glass eyes. She pulled the knife from her belt. Puffs of white cotton innards blew across the grass as she pocketed the vial. He promised it would work this time, and he’d better be right.

E hovered over her mug of beer. It wasn’t cold, but it was better than nothing. She couldn’t remember the last time she had good beer. Ridiculous, she thought. Society goes to hell and you can’t even get a decent drink. Although, it made sense that everyone would go straight to the liquor store when it was clear staying indoors couldn’t keep you safe.
“Anything new?” Thad asked, wiping halfheartedly at an ancient stain on the bar.
“Nope. Put down a few on the way over, but they wasn’t long for living anyway. One of ’em had no arms and barely any face. Almost seems a mercy t’ do it,” E wiped her lips across the back of her hand.
Thad’s bar was dirty, from the wooden counter-top to the empty bottles on the shelves. She hoped the glass was clean, but it didn’t really matter. She looked at the grit under her nails. Guess she didn’t have much reason to notice the dirt in Thad’s. There was blood on her boots, too, but it was mostly dry.
“Bastards,” Thad said without sympathy. “If they hadn’t been so busy to snort that garbage up they noses, they might still have faces left.”
“Couldn’t have known it’d be like this,” E said. “Guess the government scientists wasn’t as smart as they thought they was.”
“Always knew the Man would be the one t’ bring us down,” Thad nodded sagely. “Given them meth heads and tweakers them lab-drugs, tellin’ ’em the high would be jus like flyin’.”
“Guess they never thought they high-tech drugs would turn the tweakers into flesh-eaters. An ‘unforseeable epidemic,'” E mimicked the newscasters.
She took another gulp of the lukewarm beer. It was almost flat, too. But Thad’s was the only safe place for miles, and he’d done her a favor or two in the past.
“If that weren’t bad enough, they flesh-eaters made more. Now we’s got a country of flesh-eaters,” Thad shook his head.
“Least you can tell the flesh-eaters from they looks these days, before, they was all dressed up in suits,” the deep voice made E choke on her beer.
Coughing, she slid off the stool, hand going to the rifle slung over her shoulder.
“Evie, love, thought that was you,” he scraped his dark hair back from his face. It was longer than she remembered and he’d finally turned to dreadlocks.
“The hell you doing here, Owen?” E crossed her arms over her thin chest.
“Heard you was down this way,” Owen laughed, smacking his hand down on the wooden counter. “Your finest lager, Thaddy old boy, and whatever the lady was drinkin.”
Thad looked to E before reluctantly going to get the beer. She glared at Owen, wishing, not for the first time, that he was shorter. He wore two pistols in holsters under his arms and the machete she remembered, its blade chipped in several places. Owen slid onto the bar stool next to the one she had just vacated and grinned, draping his lean arms on the dirty bar. She could just see the tip of the scorpion tattoo that ran up his forearm under his ragged flannel shirt. He caught her looking and pushed his sleeve up.
“Remember this?” he grinned, long fingers rubbing the inked insect. “Still got yours?”
“I swear I’ll–” E broke off as Thad reappeared with the beers and slid them across the bar.
Owen trapped E’s hand in his as she reached over to grab hers. His rough fingers covered her much smaller hand and restrained her as she tried to pull away.
“Now, darlin’, is that any way to greet your husband?” He leaned towards her, gray eyes searching her face. They looked even lighter against his weather beaten, dust coated skin.
“Wouldn’t be my husband anymore if I had my way. Ain’t no way to get a divorce when there’s no more government,” Evie said, finally freeing her fingers. “I would’ve been shot of you years ago.”
Owen laughed again, taking a long drink. He grimaced and set the beer back down, staring at it with far too much interest. E eyed him nervously; Owen was never quiet. She looked away when he turned. He reached across the bar again but she pulled her arm out of his reach, leaning towards her own beer to hide the movement.
“You wouldn’t up and divorce me just when the world’s goin’ to hell,” he said quietly, grey eyes glinting. “You wouldn’t do that, Evie Carpenter.”
“Don’t…call me that. It’s E, and I don’t use your last name anymore. What are you doing here, Owen?” she looked him straight in the eye at last. “Don’t say you came all this way cause you heard from some friend of yours that I was back here.”
Owen gave her a measured look and took another sip of the flat beer.
“Well?” E asked, irritated by his silence. “You forget how to talk, chasin’ tweakers through the swamps with that damn machete?”
“You told me not to say I came way back down here for you,” he said.
“Of all the—” she broke off as there was a shout and one of the boys out front poked his head in the doorway.
“Big pack of ’em. ‘Bout twenty or so,” he yelled.
Thad pulled his shotgun out from under the bar, pockets already filled with ammunition. The three of them scrambled towards the door.
Owen swore loudly when he saw the mob, a pistol in each hand. They ducked behind the barrels and sandbags Thad put around the perimeter. They waited until they heard the moaning, smelled the rotting stench of the tweakers.
Owen glanced at Evie, who leaned on the makeshift barricade with her blonde eyebrows furrowed. Her ragged shirt was untucked, and he could see, just above the top of her pants, the tip of a scorpion’s tail. He grinned and turned back to the flesh-eaters, ready to shoot the head off anything that came close. 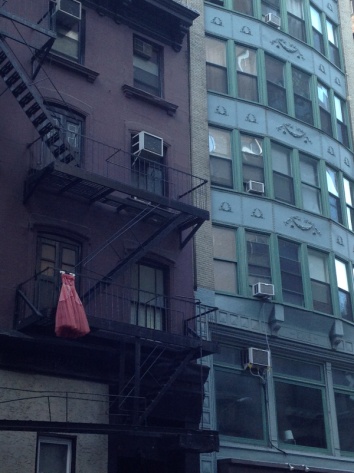 A pink dress. That was just like her, choosing something so ostentatious. Something she would never wear. The fire escape clung to the old building with iron fingers. The dress fluttered halfheartedly, a butterfly with a bent wing.
It looked strange, so clean against the old soot-stained stone. He knew she was up there, waiting. Avoiding the puddles, he walked across the cobbled street and came to the bottom of the ladder. He stared up at the dress, whirling in the damp breeze. The steely sky overhead promised rain.
He grabbed the bottom run and swung himself up. He grinned.

Another Friday Fictioneers challenge from Rochelle. This week’s photo by Janet Webb.