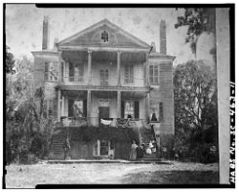 South Carolina – 1840
Joshua Hawkins pushed his driving goggles back on his dirty forehead and unwound his grimy scarf. There really wasn’t much he could do to avoid dust in July in South Carolina, but it surely was a pain in the nether regions nonetheless. Joshua handed his scarf and long duster coat to his valet, Twiggs, whose dark skin was coated with a layer of grime that made his face look powdered except around his goggled eyes. He stared up at the plantation house. The paint on the once pristine white exterior looked like flakes of skin peeling away to reveal dingy gray bones. The autocar wheezed slightly, emitting a puff of steam. Joshua handed his gloves to Twiggs and stowed his goggles in the special case he kept in the glove-box. They were Italian leather and brass, made by one of the best lensmakers back in England—Jasper & Jessups.
“Twiggs, take the autocar into the old stable–you remember where it is–and see if the regulator has come loose from the steamshaft,” Joshua turned back towards the plantation house.
“Yessah,” Twiggs said.
The autocar let out another large puff of steam and a frightful bang as Twiggs put it in gear and Joshua shook his head. Blasted piece of machinery. The dust kept clogging the regulator and the cogs weren’t catching properly due to all the grit. He never had this problem in Charleston, but luckily Twiggs was not only a perfect manservant but an effective machinist. No one he knew had a slave who knew his way around an autocar from cog to chrome like Twiggs.
The stairs creaked beneath his feet as he walked towards the front door, stepping around a large hole. Joshua shook his head. He pulled a key from his waistcoat pocket and turned it in the lock with difficulty. The stench of dust and decay assailed him as he entered the foyer. No butler stood at the door to offer him a glass of water or bourbon, more was the pity. His boots echoed hollowly in the hallway. Moths had eaten the magnificent rug from Persia to nearly nothing. He could buy another in Charleston now that they came over on the dirigibles. He had never flown in one himself, but they were marvelous things. He preferred his autocar. Another bang echoed through the open door and he winced. When the confounded thing worked.
He hesitated before opening the door to his father’s study. Even before the house was closed, this room had been shut for years. He glanced at the wall behind his father’s desk. The hair on his scalp prickled even though the painting that had been spattered with blood and brains had long since been removed.
The plantation was in deep financial trouble and after the autocar accident cost Joshua’s father his leg, Mason Hawkins had never been quite the same. He refused the offer of a new cogwork leg.
“I’m no piece of machinery made of gears and metal and pistons!” he shouted. “Worse than being a negro—being half a machine.”
Joshua remembered his father’s face turning purple; the stump of his leg had seemed to twitch in revulsion and indignation at the thought. Two weeks later, a loud bang shattered the still night air. Joshua made it to the study first, keeping his mother and sisters out. They collapsed in the foyer, clutching each other and wailing fit to wake the dead–which, of course, they couldn’t.
Joshua walked to the bare bookshelves, resolutely ignoring the stain on the floor that lingered even after the house slaves scrubbed it with sand. He knocked his knuckles against the panels until he heard an echo. Sliding the wood aside, he saw the bottle of dusty bourbon just where he remembered. Now, to find a glass.
“Well, Mr. Hawkins, I declare, I’m sure pleased to see you.”
It was the last voice he expected to hear. He turned to see a beautiful lady with auburn hair tucked under a burgundy silk top hat. The net veil covered half her face, but he would recognize that voice anywhere. Her voluminous skirts seemed to fill the hall and the brass driving goggles around her neck gleamed in the late afternoon sun that lit the dust motes on fire.
“Miss Isabella Polk,” he said. “It is still Miss Polk?”
“It is indeed, as you very well know,” she laughed, pulling the net back to reveal her long-lashed green eyes. “You called on my mother.”
“I’m afraid you’ve discovered my deception,” he laughed.
“Share some of your bourbon with me and we’ll call it square,” she said.
“I do believe that can be arranged,” he offered her his elbow. “I fear there won’t be any ice.”
They made their way down the hallway which creaked deplorably. To Joshua’s delight, two tumblers sat in the dark recesses of a cabinet. He wiped them out with his handkerchief and splashed some amber liquid into each. With a clink, they toasted one another.
“Welcome home, Mr. Hawkins,” Isabella said.
Joshua lifted his glass to drink but cursed suddenly. Bourbon splashed onto the floor and the bottom of Miss Polk’s dress. He sank to the floor in humiliation as his leg gave out. Isabella shrieked and set her glass down on the edge of the table where it toppled to the floor in a spray of tawny liquid and smashed on the floor.
“Joshua, what ever is the matter?” Isabella cried, white-faced.
Twiggs appeared and pulled Joshua over to the side of the room to lean against the wall. He unbuckled Joshua’s left boot and rolled up his trouser leg. Isabella gasped, wavering on high-heeled boots. Twiggs pulled a tool from his pocket and began tightening one of the screws in the gleaming apparatus that began where Joshua’s knee used to be. Joshua leaned back, remembering his father’s last words, scrawled on his desk.
“Better to die as a man than live as a machine.”
He started to laugh.

From the Smashing Sub-Genres Challenge, where I “rolled” Southern Gothic and Steampunk.

*The southern Gothic style is one that employs the use of macabre, ironic events to examine the values of the American South (wikipedia)

*Steampunk is a sub-genre of science fiction that typically features steam-powered machinery,especially in a setting inspired by industrialized Western civilization during the 19th century (wikipedia)

26 thoughts on “The Fall of the House of Hawkins”

Tell me everything I want to hear Cancel reply